Kakamega National Reserve is home to various species of primates, the park protects the only mid-altitude tropical rainforest in Kenya. Kakamega forest is the only remnant of the Guinea congolian rainforest in Kenya. The forest is a unique location for filming in Kenya because it contains many species not found elsewhere in Kenya. The reserve lies in the Lake Victoria catchment area about 50km north of Kisumu and just west of the Nandi Escarpment on the edge of the central highlands. The reserve is also a water catchment area with the Isiukhu and Yala rivers flowing through it. It is one of the best places to film primates and birds on Kenya.

What to film in Kakamega National Reserve

Kakamega National Reserve is home to over 300 bird species, over 300 varieties of trees, 27 species of snakes, over 400 species of Butterflies, this makes it one of the best places to film butterflies in Kenya. The forest also holds mostly indigenous vegetation.

The reserve is best known for filming primates in Kenya. Major Primates to film include Black and White Colobus monkeys, flying squirrels, blue monkeys, and pottos, the world’s slowest mammal. Among other unique animals to film include Forest buck, duiker, and dik-dik. The Reserve is also home to the endangered De Brazza’s monkey found in the Isolated Kisere forest Reserve part of the larger Kakamega National Reserve. 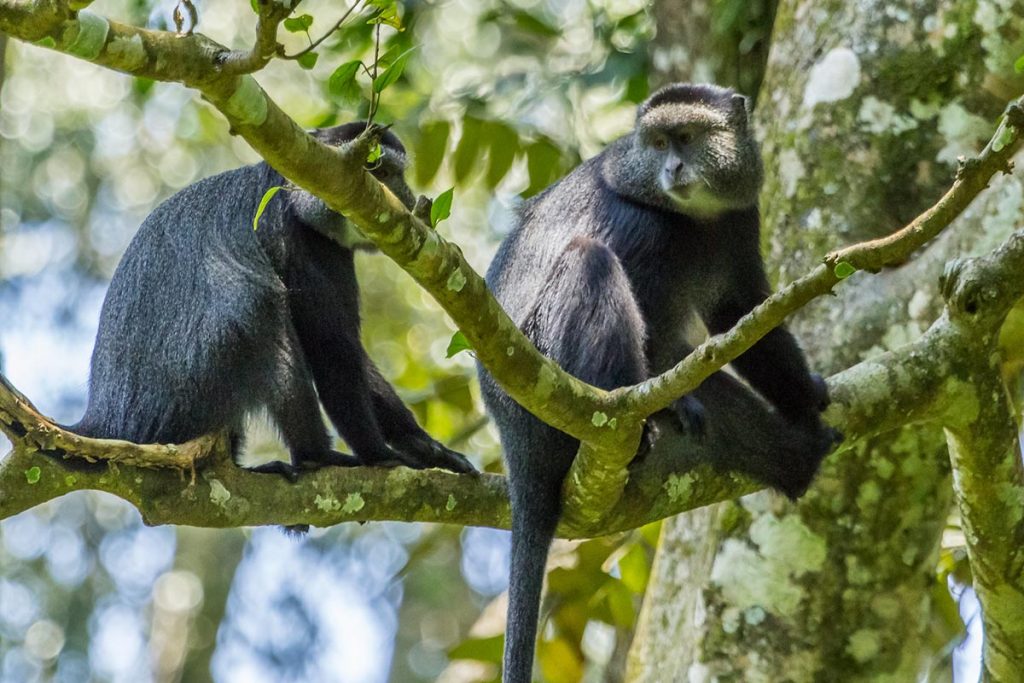 Like filming in other National Parks in Kenya, you will need to get a filming permit from Kenya Film Commission for you to be allowed to film in Kakamega National Reserve. In order to get a Filming Permit, one must write a letter requesting the permit and fill out an application form which must be accompanied by a copy of the screenplay, a story synopsis, and a shooting schedule. These should be sent to the Film Licensing Officer, Kenya Film Commission. Filming permits for features, documentaries, short films, music videos, corporate videos, and commercials are issued within minutes of application. Applications for TV Series and full-length feature films are processed in less than 48 hours of application. Contact us at Film crew fixers we will be able to help you process the filming permissions with the Local Authorities in Kenya for you to be able to successfully film in this park.

Filming fees and costs for filming in Kakamega National Reserve

The following charges are applied for any filming in Kakamega National Reserve:

On top of the above you will need to cover Press accreditation, accommodation, transport, and others for a successful shoot in Kakamega National Reserve as below;

All film crew members are by law supposed to be accredited by Kenya Film Commission to be allowed to film in Kakamega National Reserve. Local filming agents and Private production companies or individuals are requested to submit their applications through a local agent registered with the ministry. This requirement is mandatory for all applications to make feature films or documentaries. Each crew member is required to fill a Kenya Film License Form (which we normally send to you) with all details, scan and send it back to us with a copy of his/her passport as well as one photograph to be put on his/her filming license. On top of this, we will need a letter from the filming company detailing who they are, why they are filming, where they will be filming, and details of crew members on this shoot. We will attach this letter to all details provided and send them to Kenya Film Commission for film license processing. This takes 2-3 working days to have these film licenses ready.

Film Crew Fixers will help you organize transport for film crews to film in Kakamega National Reserve depending on their interest, budget, and the nature of roads in such selected locations to film in the park. We recommend Customized 4×4 Land Cruisers which costs from USD200-250 per vehicle per day with Driver/Fixer or 4×4 Safari Vans from USD200 per Van per day with driver/Fixer. For us to estimate how much it will cost in terms of fuel, we will need to look at your filming schedule to establish mileage and distance to be traveled. We also organize both charter and scheduled air transport for those that need to fly in order to reduce on the number of hours.

Fixers in Kenya to help you film in Kakamega National Reserve

All our vehicles come with drivers who act as location fixers and most of them have been to almost all parts of Kenya and are thus conversant with the local situations and are able to provide relevant information and fix any situation on the ground. These act as intermediaries between you and our office while on-location filming in Kakamega National Reserve.

Where to stay during filming in Kakamega National Reserve

Lodge and Hotel options to stay in during filming in Kakamega National Reserve range from Budget, mid-range to luxury options. You will choose what to stay in depending on your interests and budget. Contact us here for booking details. Options include Udo Bandas among others.

What is the best time to film in Kakamega National Reserve?

Filming in Kakamega National Reserve is done all year round and the best time is during the months of December to February and then June to October which is relatively drier than March to May and November.

Why use Film crew fixers to film in Kakamega National Reserve

Film crew Fixers is a local fixer company based in Uganda, we assist filming companies and Production agencies in Uganda and East Africa as a whole and have done it for the last 8 years. We handle all fixer services required with our professional team of local fixers and driver guides. We have all relevant connections with other service providers and government agencies to make sure that accreditation and filming permits are processed in the shortest time possible. Contact us for details and all relevant information you would like to know for successful filming in Kakamega National Reserve.